When we heard about RedTed's kids art linky we thought 'that sounds lots of fun'. As we had at lots of time to think about the project (unlike our usual 'we need an activity fast' mode) we visited the library and flicked thought picture books of great artists to inspire us (well 'The Fairy' and flicked and I tried to stop 'The Frog' chewing the books - luckily our library are very child friendly and don't seem to mind!) . I had originally thought of taking inspiration from Kandinsky as I love the colour and shapes in this piece.   However I'm trying really hard not to be too 'adult directed' with 'The Fairy' so I let her choose. Fortunately she chose the book on Kandinsky. When I asked her why she chose it, she siad 'Because its soooo big mummy - I like big!'  (and it was massive which meant we had an interesting walk home from the library - I could have thought that one through a bit better!)

We looked through the book and found a picture the 'The Fairy' liked. We talked about the colours and shapes in the picture (lots of rectangles and squares). Apparently Kandinsky used red for peoples bodies alot so we decided to have 2 tones of red.

I then cut up some rectangles out of coloured paper (under a watchful gaze of 'The Fairy').

She then got sticking. 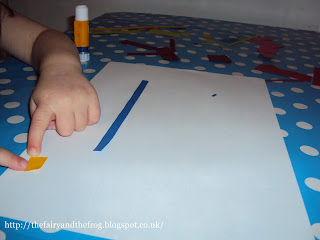 I love the layered effect of this one. 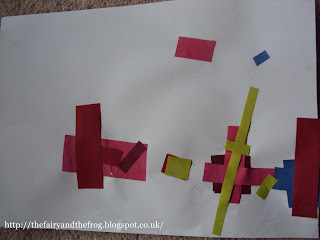 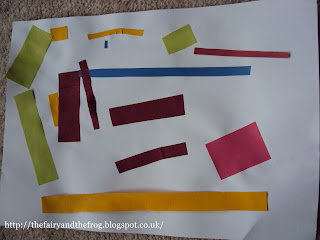 Finished pictures with the inspiration in the book. 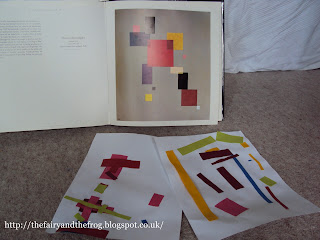 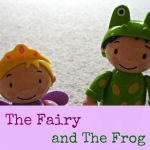 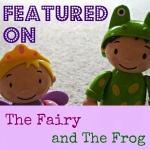 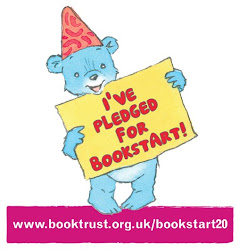